Researchers from Northwestern’s Engineering department have invented a new high-resolution camera that can see around corners and through objects — even skin, fog, or a human skull.

The process is called synthetic wavelength holography, and it’s a new method that works by indirectly scattering light onto hidden objects, which then scatters again and travels back to the camera. An algorithm then reconstructs that scattered light signal in a way that reveals hidden objects. The team says that due to its high temporal resolution, the method also could potentially see fast-moving objects like cars speeding around corners or the human heart beating through a chest.

The idea of photographing or visualizing a subject around a corner versus seeing an organ inside a human body may sound like completely different challenges that would require different solutions, but the team says that they are actually closely related, since both deal with scattering media in which light hits an object and scatters in a manner that a direct image of the object can no longer be seen.

Synthetic wavelength holography is part of a new field of research called non-line-of-sight (NLoS) imaging. The method developed by the Northwestern researchers can rapidly photograph full-field images of large areas with what they describe as submillimeter precision. 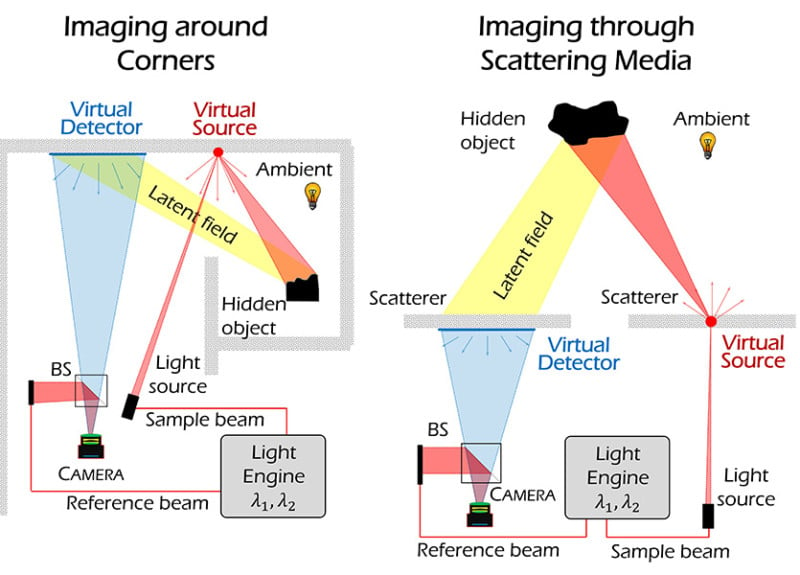 “With this level of resolution, the computational camera could potentially image through the skin to see even the tiniest capillaries at work,” Northwestern’s Amanda Morris writes.

While the team says that the obvious use cases for the technology exist in medical imaging, they also argue that it could be used as an early-warning tool in car navigation systems or industrial inspection in small spaces. The team says that possible applications are “endless.”

“Our technology will usher in a new wave of imaging capabilities,” says Florian Willomitzer from the McCormick School of Engineering and the first author of the study.

“Our current sensor prototypes use visible or infrared light, but the principle is universal and could be extended to other wavelengths. For example, the same method could be applied to radio waves for space exploration or underwater acoustic imaging. It can be applied to many areas, and we have only scratched the surface.”

A detailed breakdown of how the team designed and built the camera can be found on Northwestern University’s website as well as on the full research paper published on Nature.

Affordable and efficient portable power is a necessity these days, keeping our electronic devices operational while on the go. But

A 5G Billboard in Times Square Powered an Interactive Game